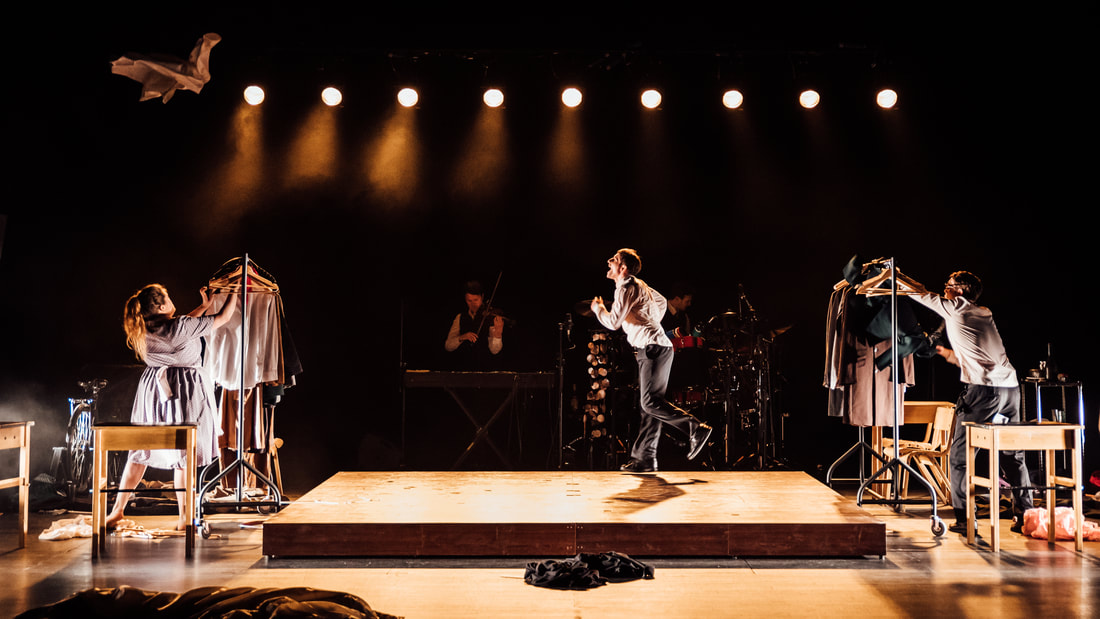 BEFORE THE BEGINNING (2009 to 2011):
Guillaume Pigé started Theatre Re in 2009, whilst still in training at the International School of Corporeal Mime in London. Originally the main purpose of the company was to be able to take Comme un Gant to the Avignon Off Festival and Your Letter, At Last! to the Dublin Fringe Festival.

Guillaume graduated at the end of 2010. Building on the success of these first two productions and with lots of time on his hands, he started to work full time for the company. Theatre Re became much more than just a vehicle for a production and developed into a professional ensemble in 2011.

AFTER THE BEGINNING (2011 to present):
In 2011 Alex Judd (Composer & Musician) became an Associate Artist of Theatre Re and together with Adam Taylor (Writer), Tugba Tamer (Performer), and later with Katherine Graham (Lighting Designer) they created The Gambler. For the first time, the company received funding from Arts Council England. They also established a permanent base in Haringey (London) and began a meaningful relationship with Haringey Council.

The Gambler previewed in London in 2011 at The Roundhouse Studio, The Space and Jacksons Lane, before transferring to the R.A.D.A Festival and the Edinburgh Fringe Festival with The Pleasance in 2012. The show received 5-star reviews (Three Weeks & Broadway Baby) and was ranked in the top 3 best-reviewed shows at The Fringe by Tick It. The successful run in Edinburgh led to a UK tour in 2013.

In 2013, Theatre Re was invited to become an Associate Company at South Hill Park Arts Centre in Bracknell. A new project was also in the making in collaboration with Alex Judd, Katherine Graham, Selma Roth (Performer) and Malik Ibheis (Costume Designer and Performer). The company received financial support from Arts Council England and further developed its partnership with Haringey Council. The Little Soldiers opened at The Cockpit Theatre in London and was nominated for two Off-West-End Theatre Awards – Alex Judd for Best Sound Design and Malik Ibheis and Amédine Bello for Best Costume Design. The piece then transferred to the Edinburgh Fringe Festival 2013 with The Pleasance, where it was nominated for the Brighton Fringe Pick of Edinburgh Award for Emerging Artists. Following its Edinburgh Fringe success the piece toured in the UK, France and Switzerland.

In 2014, Malik Ibheis became an Associate Artist of Theatre Re. The company also started developing a new piece called Blind Man’s Song in collaboration with Alex Judd, Selma Roth, Katherine Graham, Malik Ibheis and A.C Smith (Dramaturg). The project was funded by Arts Council England and supported by Haringey Council, South Hill Park and The Greenwich Theatre. The piece opened as part of the prestigious London International Mime Festival at Jacksons Lane in January 2015 before touring in the UK. The show then transferred to the Latitude Festival and the Edinburgh Fringe Festival with The Pleasance, where it was part of the BBC’s highlights of the Fringe.

In 2015, Katherine Graham became an Associate Artist of Theatre Re and the company became a Supported Company of The Greenwich Theatre. Following its Edinburgh success, the company organised a 40-date Blind Man’s Song tour around the UK, Germany (Recklinghausen Ruhrfestspiele) and France (Mimos Festival IN). Blind Man’s Song was also picked by The Culture Trip as one of the UK local favourites for 2016 and part of Theatre Things’ 2016 highlights.

In 2017, The Nature of Forgetting previewed at The Point Eastleigh and opened as part of the 2017 London International Mime Festival at Shoreditch Town Hall (main space) in January 2017. The show then transferred to the Latitude Festival (Theatre Arena) and at the Edinburgh Fringe Festival with The Pleasance as part of the British Council Edinburgh Showcase 2017. The Nature of Forgetting received 13 five-star reviews and was awarded The ThreeWeeks Edinburgh Arts Editors’ Award 2017. More than 6000 people came to see the piece in Edinburgh.

In 2018, Theatre Re became an @Home company at The Point, Eastleigh. Following its Edinburgh success, the company organised its largest UK tour to date bringing the show to 13 cities across the UK including Bristol, Belfast, Canterbury, Lancaster, Manchester and Leeds. The piece was also part of the Every Third Minute Festival at The West Yorkshire Playhouse.

With the support from the British Council, The Nature of Forgetting was performed to sold-out audiences in Brazil in Campinas as part of Feverestival 2018 and in Sao Paolo (SESC Santana), and in Peru in Lima as part of the FAE Lima 2018.

The company directed the actors in training at Fourth Monkey Theatre Company to create a new piece called The Woman and the Canvas. They enjoyed a sold-out run at the Edinburgh Fringe Festival 2018 and the Camden Fringe 2018. It also received 5-star reviews from British Theatre Guide and the Edinburgh Guide.

In July, a work-in-progress of BIRTH was presented at South Hill Park Arts Centre.

In the Autumn 2018, The Nature of Forgetting toured for 5 weeks on the East Coast of the USA. The piece was seen by more than 4000 people in 13 different venues spreading from Maine to Florida.

In 2019, BIRTH previewed at The Point Eastleigh and then enjoyed a sold-out run as part of the 2019 London International Mime Festival at Shoreditch Town Hall ( Assembly Hall). More than 900 people came to see the piece over 4 days.

In the Spring, The Nature of Forgetting premiered in Asia; first in South Korea at the Wooran Foundation and then at the Hong Kong Cultural Centre as part of the prestigious Hong Kong Arts Festival (supported by the British Council). The piece transferred to New York and played for two weeks at The New Victory Theater. The team also travelled to Taiwan (supported by the British Council) and played the Kaohsiung Spring Arts Festival and at The National Taichung Theatre. In May 2019, the piece was invited to open the Salisbury International Arts Festival in the UK.

In the Summer, Birth was re-developed and played at York Theatre Royal and had two shows at Latitude Festival, before heading to the Edinburgh Fringe Festival with The Pleasance.

In the Autumn, The Nature of Forgetting toured to Mexico at the prestigious Cerventino Festival in Guanajuato and Leon (supported by the British Council and Anglo Arts) before heading to the Midwest of the US for 3 weeks (8 venues across 7 states).

In 2020, the company received its first major grant from Arts Council England to develop its capacity and infrastucture.

A new project is currently in the making and both The Nature of Forgetting and BIRTH will be touring in the UK and around the world.